The Lindau annual meetings of Nobel Laureates arose from an inspiration of medical researchers who proposed the idea to Count Lennart Bernadotte, a member of the Swedish royal family who resided on the island of Mainau on Lake Constance (the Bodensee). The participation of Nobel Laureates was intended to bring an audience of international specialists to the island of Lindau for the congress, and their expertise would then benefit German medical researchers. Since then the meeting has evolved to an annual event involving the participation of some twenty to thirty Laureates and more than five hundred and fifty young (doctoral and postdoctoral) researchers who spend a week in early July listening to lectures from the Laureates in the mornings and interacting in a more informal manner with the Laureates at master classes and discussion groups in the afternoons. The subject matter of the meetings rotates annually through the three scientific themes of the Nobel Prize disciplines of physiology/medicine, physics, and chemistry followed by an interdisciplinary meeting. The theme is underpinned by a uniting topic that is debated on the island of Mainau on the final day where all the participants are guests of the Bernadotte family. The meeting is financed by a charitable foundation (the Lindau Foundation) and by contributions from the participating countries, and is organized by the Lindau Council.

The Lindau Meetings, and the underlying idea of creating a platform to facilitate encounters between Nobel Laureates and the world’s best young scientists of tomorrow, enjoy widespread support. More than 250 Nobel Laureates are members of the Founders Assembly of the Foundation and demonstrate, through their membership and their participation in the Lindau Dialogue, their support for the principle of the Lindau Nobel Laureate Meetings. Personalities from the worlds of science, politics and industry have been inaugurated into the Foundation’s Honorary Senate in recognition of the special commitment they have shown towards scientific excellence and the promotion of young researchers.

Each year a specially constituted Australian Academy of Science Committee will call for applications and administer the selection process ensuring that the highest standards are met in choosing the best applicants to represent the particular discipline at Lindau. Each year the Academy will also nominate a Member of Council or prominent senior Australian scientist to accompany the delegation.
Further information on the Lindau Nobel Laureate meetings can be found on the Foundation’s website.

Funding for one early career researcher to attend the Heidelberg Laureates Forum was provided by SIEF from 2017.  The Forum is an annual networking event that offers all accepted young researchers the great opportunity to personally interact with the laureates of the most prestigious prizes in the fields of mathematics and computer science. For one week, the recipients of the Abel Prize, the ACM A.M. Turing Award, the ACM Prize in Computing, the Fields Medal and the Nevanlinna Prize engage in a cross-generational scientific dialogue with young researchers in Heidelberg, Germany. 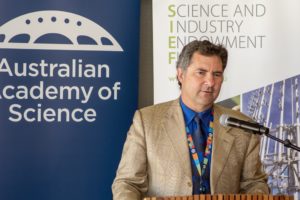 Dr Larry Marshall, Trustee of SIEF announcing the extension to the SIEF-AAS Fellowships to the Lindau Nobel Laureate meetings, at the Shine Dome in Canberra on the 2 September.

Dr Larry Marshall announcing the extension to the SIEF-AAS Fellowships to the Nobel laureate meetings.

In 2019 the Trustee of SIEF determined that an additional one million dollars will be provided to the Australian Academy of Science to fund Australian early career researchers to attend the Lindau Nobel Laureate meetings and Heidelberg Laureate Forum for an additional ten years until 2031.  The announcement was made by the Trustee Dr Larry Marshall at an event at the Shine Dome in Canberra in November 2019 that was attended by a number of Lindau Nobel Laureate meeting alumni from across the country.  The funding will continue to support up to ten postdoctoral fellows and PhD students to attend the Lindau Nobel Laureate specialist discipline years and up to fifteen to attend the multidisciplinary meetings, and one postdoctoral fellow or PhD student to attend the Heidelberg Laureates Forum.