This presents a significant opportunity for the establishment of an Australian renewable hydrogen export industry. The nation has access to vast energy resources through sun, wind, biomass, natural gas, and coal, all of which can be used as feedstock for the production of ammonia. Using ammonia (NH3) as a carrier, renewable hydrogen produced in Australia can be readily distributed, at large scale, to emerging markets in Japan, Korea and Europe using existing infrastructure for ammonia transport. The gap in this supply chain is a technology that can efficiently and inexpensively convert ammonia into high-purity hydrogen at or near the point of use. Hydrogen must be at least 99.999% pure to meet fuel cell vehicle (FCVs) requirements. 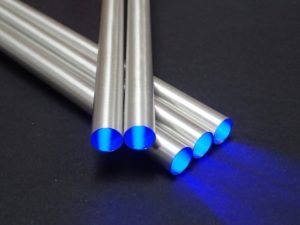 CSIRO’s metal membrane tubes, which were scaled up to 500mm in length, allowing a production scale of 5kgH2/day under the SIEF EDP project.

In this $3.4 million project, 50% of the project cost was funded from the SIEF as an ‘Experimental Developmental Program’ (EDP); the remainder was contributed by CSIRO. BOC provided over $100,000 of in-kind gas products and equipment as well as technical expertise.

Hydrogen has the potential to power vehicles and industry around the world; however, due to its low density, it is notoriously difficult to store and transport.

The available technologies such as compression, liquefaction of hydrogen (producing liquid H2, below -253°C) or storing in metal hydride, incur a significant energy penalty, are poorly suited to export thereby offering a complex, inefficient and/or relatively expensive process for the intended utilization.

CSIRO’s solution addresses the conversion of ammonia to high-purity hydrogen at, or near, the point of use. Ammonia stores almost twice as much hydrogen than liquid hydrogen and is easier to ship and distribute, opening up possibilities for a renewable energy export market—as long as it can be converted to high purity hydrogen effectively and efficiently.

Ammonia (NH3) has long been considered a prospective H2 storage and transport medium, exhibiting a higher volumetric H2 density than liquid H2, through liquid-phase storage at mild pressure. In the Australian context, the financial and technical barriers to using ammonia as a hydrogen carrier are much lower compared to other available options (methanol/ ethanol/ toluene/ organic chemical hydrides) due to existing infrastructure and industry to support transport/storage of NH3 at large-scale.
There is currently a significant glut in ammonia production capacity: current capacity will soon reach 250 Mt per annum (current production is 200 Mt per annum). Not only can the ammonia industry accommodate a shift to renewable hydrogen production, but the industry is actively seeking an opportunity to use this excess capacity.

The project team developed a metal membrane reactor which allows hydrogen to pass, while blocking all other gases. By coupling membranes with a suitable catalyst for ammonia decomposition, pure hydrogen can be extracted from ammonia efficiently. There is an opportunity for this technology to influence the design of, and to be a key component of equipment and devices in, ammonia-hydrogen distribution and refuelling systems.

From a technology perspective, this project has moved the technology readiness level (TRL) of the suite of technologies from 4 to 6:

This is a critical (and difficult) stage of any process moving towards large-scale industrial deployment. Specific outputs include:

A 3D computational fluid dynamics (CFD) model of the H2 generation system, critical to the design of the demonstration-scale system, ongoing technology commercialisation and scale-up.

An innovative process for manufacturing vanadium alloy tubes, a key component in scaling up this technology from lab to commercialisation scale. This led to the successful manufacture of 20 membrane tubes, at the greater lengths of up to 500 mm.
Demonstration of CSIRO metal membrane as being highly permeable for H2, resistant to embrittlement and low cost for manufacturing.

The demonstration H2 generation system, at the scale of 5-15 kg H2/day operational for > 1,000 hours with an average >80% NH3 conversion efficiency and >80% H2 recovery rates, higher than targeted thereby proving the viability of the technology and without any issues with system performance.

Demonstration of  higher purity of generated compressed H2 than required standard purity requirements (ISO14687-2). Further evidence that purity analysis will be an ongoing aspect and challenge for the emerging hydrogen energy industry. 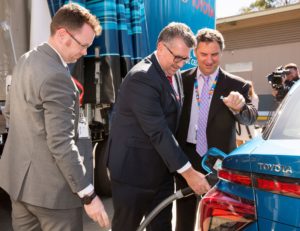 The technical validity of the technology was demonstrated during the project at CSIRO Pullenvale site on 8 August 2018 where, in conjunction with project partners, CSIRO successfully refuelled two fuel cell electric vehicles, a Toyota Mirai and a Hyundai Nexo, using hydrogen produced from the demonstration rig. This event was covered by multiple media outlets  and was world’s first demonstration of fuel-cell vehicles refuelling with hydrogen derived directly from ammonia.

The advancement in TRL of the CSIRO technology, coupled with the increased awareness as mentioned above, has led to the execution of a collaborative partnership agreement with Fortescue Metals Group Ltd (FMGL). The metal membrane technology is now licenced to FMGL which is funding the development of a larger-scale pilot plant (200 kg/day). Following the successful outcomes of this project, the team is working on increasing the technology in scale and deploying it in several larger-scale demonstrations in Australia and internationally, in a partnership with FMGL.

Co-development with FMGL to commercialise has other benefits that include:

The impacts of this project are both technological and more widely relevant to the emerging hydrogen energy industry. During this project, two press releases were issued by CSIRO team, first one in May 2017 and second one in August 2018 on the H2 refuelling demonstration day. These press releases generated a large number of media queries and stories not only on CSIRO technology, but also on the use of hydrogen itself as a sustainable transport fuel for the future. Due to the growing awareness, other Australian initiatives that aim at generating renewable and sustainable hydrogen to export to countries like Japan and Korea, for the development of the FCEV market are gaining traction.

A number of external collaborators/partners made this SIEF EDP project a success. These included:

Roadmap from R&D to benefits for Australia

Through this partnership and further commercialisation activities, CSIRO has demonstrated its role in showing how R&D enables and supports new industries. This technology has the potential to be another key enabler and catalyst for the start-up of an Australian hydrogen value chain and export economy.

A successful ammonia-to-hydrogen technology will play a critical role to demonstrate a viable solution. To move to a commercial undertaking, the team is developing internationally-linked demonstration projects. Any longer-term outcomes will require the ability to plan and deliver these projects with government and industrial partners.

The final step for commercialisation of this technology requires engagement with H2 and fuel cell vehicles industries that can facilitate the incorporation of commercial-scale CSIRO H2 generating system, and provide validation of the first step, for refuelling to day-to-day HFCV for real-life customers.

The establishment of a new renewable hydrogen export industry where hydrogen produced from renewable sources can be exported in the form of ammonia. This technology can also improve Australia’s fuel security and create new industries/ jobs and market niches.

The uptake of this technology can significantly reduce both national and global emissions from CO2 as well as  other sources such as coal, oil across the transport, power and industrial sectors. It can also improve air quality through the elimination of particulates generated from internal combustion engines and other emissions associated with coal mining.

Better health and wellbeing associated with hydrogen as a clean energy source. The revitalisation of regional communities through employment in new hydrogen-based industries.

The renewable energy export industry will rely on carriers such as liquid H2 and ammonia. Without this developmental work, Australia risks falling behind the rest of the world and may miss the opportunity to become a dominant power in the renewable energy realm. Solutions for renewable hydrogen production at scale would be delayed for the nation.

Without this SIEF co-funded work, FMGL would not have committed to supporting this work so publicly, and so early. That has interesting ramifications around the role of local companies in the global H2 industry, around the pace of change in Australia and the role of large corporations.

A successful ammonia-to-hydrogen technology will play a critical role to demonstrate a viable solution. To move to a commercial undertaking, the team is developing internationally linked demonstration projects. Any longer-term outcomes will require the ability to plan and deliver these projects with government and industrial partners.

The final step for commercialisation of this technology requires engagement with H2 and fuel cell vehicles industries that can facilitate the incorporation of commercial-scale CSIRO H2 generating system, and provide validation of the first step, for refuelling to day-to-day HFCV for real-life customers.

Before the SIEF project, the CSIRO membrane technology was validated only on a prototype scale in isolation of the NH3 cracking process, membrane production was limited to laboratory-scale processes, and there was limited understanding of the industrial requirements of large-scale hydrogen energy applications. There was industry uncertainty regarding the quality of the H2 produced, and a demonstration of the complete technology was needed to allow consideration of new commercialisation pathways.

SIEF funding for this project was instrumental in realising the value-proposition of this work and facilitated the translation of knowledge to a commercial solution. The support enabled successful scaling up of the technology and demonstration of its potential as the critical ‘last step’ in ammonia-based hydrogen distribution.