Hydrogen as an energy source for sustainable transport has great potential, but one of the biggest challenges facing the hydrogen fuel industry is its transport and storage: current technologies create a complex and relatively expensive process. CSIRO’s hydrogen generating system is a simplified one allowing bulk hydrogen to be transported economically and efficiently in the form of liquid ammonia. Ammonia stores almost twice as much hydrogen density than liquid hydrogen and is easier to ship and distribute, opening up possibilities for a renewable energy export market—as long as it can be converted to high purity hydrogen effectively and efficiently.

Over the two years of this project, CSIRO has taken its suite of hydrogen generating technologies and demonstrated a prototype systems for the conversion of ammonia to high-purity hydrogen for use in fuel cell vehicles (FCVs). This system includes two-main process steps: the decomposition of ammonia into nitrogen and hydrogen, followed by the separation of hydrogen from the gas mixture. A complex, three-dimensional computational fluid dynamic (CFD) model was developed in order to design the reactors for both these processes. After ammonia is decomposed into hydrogen and nitrogen with the help of catalytic reactions, the CSIRO-designed metal membrane separates ultra-high purity hydrogen from gas mixture, while blocking all other gases. The purity of the hydrogen produced was routinely tested and it was consistently found that the level of impurities was much lower than the requirements of the relevant standards. This technology will pave the way for bulk hydrogen to be transported in the form of ammonia, using existing infrastructure, and then reconverted back to FCV-quality hydrogen at the point of use.

The technical validity of the technology was demonstrated during the project at CSIRO Pullenvale site where, in conjunction with project partners, two fuel cell vehicles, a Toyota Mirai and a Hyundai Nexo, were successfully refuelled using hydrogen produced from the demonstration rig. This event was a world-first demonstration of fuel-cell vehicles refuelling with hydrogen derived directly from ammonia.

In this $3.4 million project, $1.7 million, was funded from the Science and Industry Endowment Fund (SIEF), and the remainder was contributed by CSIRO. Industry partner BOC provided over $100,000 of in-kind gas products and equipment as well as technical expertise. 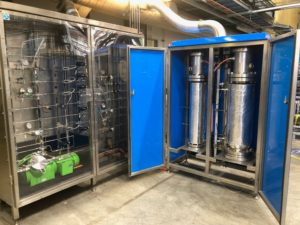