Pathogens in prawn aquaculture cause economic losses of US$6B annually. As these pathogens are commonly transmitted both vertically and horizontally, to minimize their impacts, large prawn aquaculture industries in most regions of the world currently rely on seedstock derived from domesticated breeding lines of broodstock selected to be specific pathogen free (SPF), and in some cases specific pathogen resistant (SPR) for a few less-problematic pathogens. While SPF, such seedstock remain susceptible to disease caused by many of the serious pathogens. Moreover, in some countries like Australia still mostly reliant on wild-captured broodstock, complimentary solutions to combating disease impacts are needed. In this regard, injectable dsRNA antivirals are showing promise for reducing viral loads in broodstock resulting in reduced infection prevalence and loads in seedstock, thus providing opportunities to generate higher production efficiencies as well as domesticated breeding lines free of viral infection.

The injectable dsRNA antivirals being used at CSIRO comprise synthetic double-stranded (ds)RNA molecules generally <1000 nucleotides in length and designed to be identical to critical pathogen/virus RNA sequences. Muscle injection of such dsRNA molecules activates the prawn’s natural RNA interference (RNAi) machinery to specifically bind and degrade the pathogen/viral RNA, thus interfering with pathogen replication. CSIRO research initiatives have demonstrated that such antivirals can reduce virus loads in juvenile and broodstock prawns. While not yet demonstrated unequivocally at CSIRO, such reduced viral loads are expected to reduce virus amounts available to be transmitted vertically to the sometimes >450,000 eggs each time a female spawns, which is typically up to 4 times under commercial hatchery conditions. As data generated in this project unequivocally demonstrate that injected dsRNA is not transferred to eggs or detectable in various larval life stages up to the PL stage seedstock are typically stocked into ponds to be grown for human consumption, its use as an injectable antiviral therapy is even more appealing. 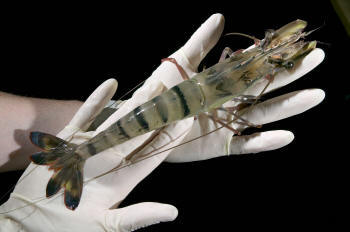 As an example of how injectable antivirals could improve farm production efficiencies, in this project, substantial improvements in prawn growth performance and survival were identified in ponds of prawns reared under commercial conditions that had been stocked with progeny of broodstock batches with lower loads of infectious hypodermal and hematopoietic necrosis virus (IHHNV). The improved growth and survival levels in these 0.16 ha ponds was extrapolated to be worth ~$70,000 per ha (ie. typical commercial pond size in Australia) in gross value. With the prospect of such gains in pond productivity, broodstock screening for pathogens followed by injection of dsRNA antivirals targeting those pathogens detected to reduce infection loads and infection prevalence/loads in progeny would likely be adopted as standard hatchery practice.

Another potential application for dsRNA antivirals is in establishing domesticated breeding lines that are tolerant and/or resistant to diseases caused by various pathogens. Exposing breeding families to pathogens under controlled conditions can be used to select and breed from survivors, and the process can be repeated to select for survivors with resistance to disease. However, should such survivors carry the pathogen in a subclinical infection state, administering appropriate antivirals could be used as a tool for generating breeding lines that are specific pathogen free (SPF) in addition to specific pathogen resistant (SPR).