Drones are becoming widely used and invaluable tools for a variety of applications. This includes the collection of 3D data and images for industrial inspections. There are many more applications that would benefit the use of drones but they are challenging because they require flying close to structures or in areas without GPS. An example is flying autonomously in an underground mine to map inaccessible areas. Current commercially available drones don’t have the capabilities needed for these applications. Hovermap has been developed to address this need.

Hovermap is a drone autonomy and LiDAR mapping payload developed by the CSIRO / Data61 Robotics Group. It is carried by a drone and interfaces to the autopilot to provide additional capabilities. It allows drones to fly autonomously in challenging GPS-denied environments to collect data that is otherwise impossible to collect. The aim of this project was to establish an Early Adopter Program for Hovermap and advance the hardware and software components to the point where they could be commercialised.

The aim of the Early Adopter Program was to have a prototype version of Hovermap used by customers so that they could test it for a variety of applications and provide learnings about where it has the most value.

During the SIEF EDP funded project the design of the prototype Hovermap payload (Hovermap100- P) was finalised and eight units were built for the Early Adopter Program. An additional three units were built for internal use. The design of the commercial-ready version (Hovermap100-C) was advanced to pre-production stage. Usability of the system was improved through the development of better user interfaces. A flight control system was developed which provides the basic autopilot functions for Hovermap and serves as a base for executing the more advanced autonomy functions. Significant advances were made in the mapping and autonomy capabilities. The Simultaneous Localisation and Mapping (SLAM) algorithm was optimised for drone use to ensure accurate 3D maps could be produced of a wide variety of environment types, even where GPS is unavailable. Four autonomy capabilities were developed, namely collision avoidance, GPS-denied flight and application-specific autonomy for the inspection of telecom towers and mapping of underground mines. The collision avoidance algorithm uses LiDAR data to generate a ‘Virtual Elliptical Shield’ (VESH) around the drone. This prevents a drone operator from flying the drone too close to obstacles, or when in autonomous mode, prevents the on-board flight controller from colliding with obstacles. The LiDAR data is also used to estimate the state of the drone (position, attitude, velocity), replacing the need for GPS. The ultimate goal of Hovermap is to use these base-level autonomy capabilities and build application-specific autonomy on top of them for a variety of applications. 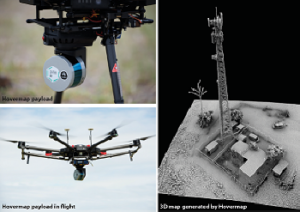 Images of the Hovermap craft and tower (Source: Stephan Hrabar)

One application is the inspection and mapping of telecommunication towers. Valuable data can be collected from a drone instead of using riggers to climb the tower. It can be a challenge to fly the drone in an optimal, safe pattern around the tower to ensure good data is captured however. We have developed and demonstrated the ability to autonomously inspect a tower using Hovermap, ensuring the data is collected in a safe, repeatable and efficient manner. In this way, many more towers can be inspected leading to improved network coverage and reliability.

A second application is the mapping of inaccessible parts of an underground mine. Three underground mine trials were conducted which included the world’s first autonomous beyond line-of-sight flight of a drone underground. This has led to significant interest from mines around the world who see the value in this capability. This will keep miners and surveyors away from dangerous areas and produces accurate mapping data that is otherwise impossible to collect. Better data will lead to safer and more efficient mining.

The Early Adopter Program has led to significant learnings which have improved Hovermap and made it a better product. It has also generated significant interest and made the market aware of Hovermap’s capability, paving the way for the successful commercialisation of Hovermap.