Most large Australian ore deposits that are being mined today were discovered via their direct surface expression, and mostly in the last century. However, much of its remaining mineral endowment is obscured under the thick cover of weathered rock, sediment and soil materials that extends over two thirds of the continent. This represents both a huge opportunity and challenge for explorers and the nation as the industry currently lacks the fundamental data, scientific knowledge and technological tools needed to discover new, world-class ore deposits buried beneath this cover.

This is a major technical risk for current and future Australian mineral exploration and is a major cause of reduced investment in Australia in exploration by the major mining companies.

To replace the resources being consumed and to provide long-term mineral wealth for the Nation, this trend needs to be reversed soon. New discoveries will sustain and drive export revenue, regional development, employment, royalty and taxation returns and a thriving mineral industry for the benefit of all Australians. Australia’s global leadership in the development and export of exploration technologies and services will also be protected and indeed grow as a proportion of the export economy.

This has been recognized by  government, industry and the research community and has resulted in the development of  UNCOVER, (http://www.uncoverminerals.org.au/), a national vision in Australia for the future for mineral exploration geoscience research to tackle the geological barriers to more tier 1 discoveries.  “The purpose of the UNCOVER initiative is to focus Australia’s relevant geoscience effort on providing the knowledge base and technology that will substantially increase the success rate of mineral exploration beneath post-mineralisation cover in Australia.”  The current project was conceived as an initial contribution to this endeavor.

As we move into exploring the deeper cover regions of Australia, we need to determine detectable signatures of buried mineral systems and ore systems from surface and near surface samples using various technologies. Arguably, the challenge is find pathfinders to mineral deposits lying within a few hundred metres, from the surface given current mining capabilities and economic realities. Firstly though, we need to know the extent of that thickness of cover, its stratigraphy, lithogeochemistry and physical properties. Comprehensive data that will in turn aid in more effective processing and interpretation of the regional data-sets such as magnetics, and increase confidence in our geological models of the sub-surface.

Further, our ability to detect an anomaly in exploration rests not in the direct detection itself but in being able to place the data point into a regional geological context. For example, research assessing burial metasomatism effects on the geochemistry of the Fortescue Group volcanics in the current Capricorn project enables industry to place perceived geochemical, geophysical and mineralogical anomalies into a broader geological and indeed regional context, facilitating a focus on prospective areas. 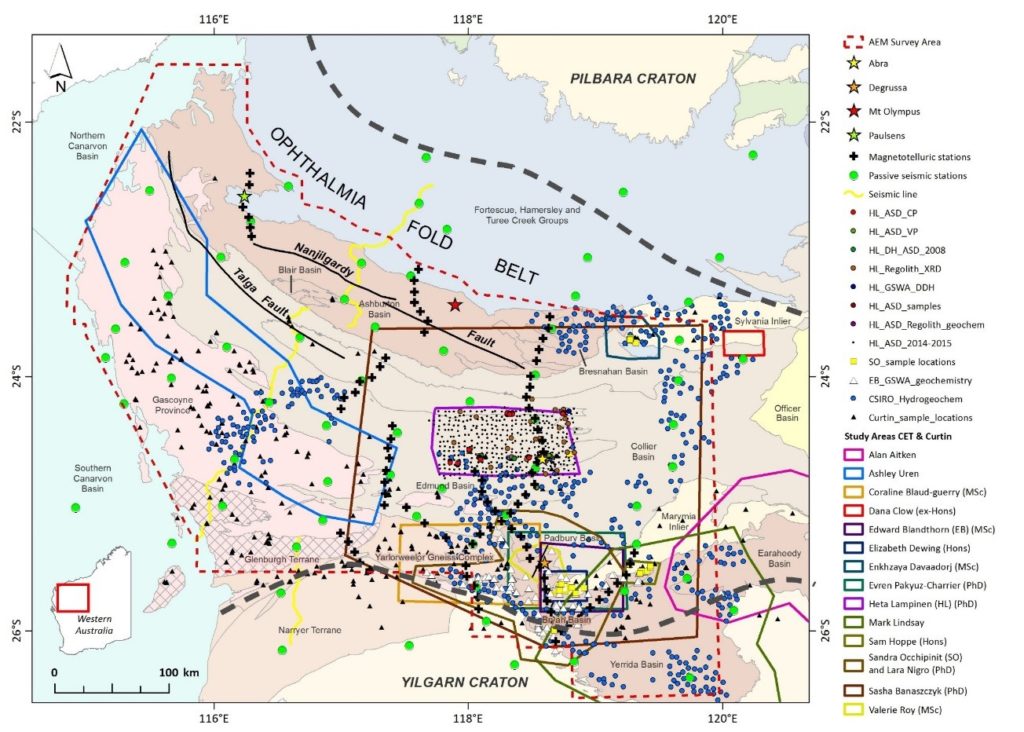 The current Capricorn Distal Footprints Project supported by SIEF, MRIWA, GSWA and industry is seen as a first contribution to this UNCOVER challenge.   Consistent with the UNCOVER philosophy the collaborating CSIRO, UWA and Curtin University teams reflect a highly collaborative and multidisciplinary approach to the challenge, including the development of a very strong cohort of early career researchers and students. A key aspect of the project has been to collect and develop data and approaches that are useful, usable and used by the geological surveys and industry as our target end users. The other aspect of the Project has been the development of tools and workflows that have application in other geological setting of Australia.

The impact achieved in the project is nicely summarised in the SIEF Independent impact review of 2017: “The toolkit of information and test results developed from this research will enable the exploration of areas where mineral detection and extraction have been previously deemed too technically difficult or not cost effective. Further, a better understanding of the mineralisation of an area could also inform decisions on how best to develop any resource that might be found. ‘The project has led to exploration activity with tenement uptake in at least one area as a direct result of the research’. Over the next 10 years, it is anticipated that more explorers will use the data and outputs as part of their targeting activities. On a broader basis, the tools and approaches will be used elsewhere across Australia and even internationally. Based on conservative valuations, the net present value of benefits of the Distal Footprints project to 2035-36 is $19.2 million. The project has a benefit cost ratio of over 5”. This provides a highly positive assessment of the impact generated. One of our main goals was that industry would use the data and approaches, recent announcements by Marindi Metals, one of the project sponsors, highlight direct application of sampling protocols and analysis methodologies that were developed in the project, in their exploration program in the region.

From a research outcome perspective, a selection of highlights from the project are:

The team has delivered numerous publications as journal papers, conference abstracts, presentations and reports, scientific results that are now readily available for the broader community to build from. The Project delivered a suite of “activity” reports that detail specific research tasks and results, and these will be published online through GSWA.  A new data platform and toolkit for mineral system assessment has been developed and the research has provided a technology pull through for the application of split stream LAICPMS to mineral exploration geoscience research challenges. Through the combination of pre-competitive data releases, scientific publications and ongoing communication to industry and other end users of the research outcomes the team will continue to deliver impact well beyond the life of the project. The “exploration tools” and workflows generated by the project have application beyond the Capricorn and we anticipate their use in a range of covered terrains across Australia. Exploration impact would be expected over the next decade and beyond as the industry utilises the data and approaches in their exploration programs.