The global drive towards making solar energy more competitive against low cost fossil fuels has given rise to some amazing solar technologies. However one of the biggest, but least publicised, challenges that solar cell researchers face is the stability and scalability of their inventions.

Teams from Swinburne University of Technology and CSIRO have joined forces to address some of the fundamental challenges associated with solar PV technologies. With $4 million in funding over 4 years from the Science and Industry Endowment Fund (SIEF) and significant in-kind contributions from industry, the two institutions and academic partner, Stanford University, the teams will work to overcome the efficiency losses that solar cells suffer when exposed to high temperatures. For every 10°C increase in operating temperature, most solar cells become around 5% less efficient in converting sunlight into electricity. Swinburne’s patented, low cost NanoPlas solar cell technology with integrated nanoparticles will be improved to incorporate advanced methods of heat disposal, and then combined with an advanced thermal management system being developed by CSIRO. The aim of the project is to develop a prototype device with improved temperature performance and a design that can be manufactured at low cost.

Swinburne’s NanoPlas solar cell technology uses a conductive glass substrate for depositing nanoparticles upon. The multipurpose custom made nanoparticles act as a barrier for reducing thermal absorption, while at the same time trapping light within the solar cell – thereby giving the photoactive material more time to convert photons into electrons. CSIRO draws on existing expertise in heatpipe technology while developing the next generation of low-cost microfluidic thermal management systems. The integration of the technologies should produce a solar cell that is highly efficient, with the added possibility of recovering heat from the microfluidic system.
The solar cells being studied are of the thin-film type, meaning they don’t require highly purified crystalline silicon and can be manufactured on sheet glass using low cost methods such as spraying. It is estimated that this approach could reduce the manufacturing cost by up to 50%, whilst maintaining comparable performance to the more complex traditional solar panels. 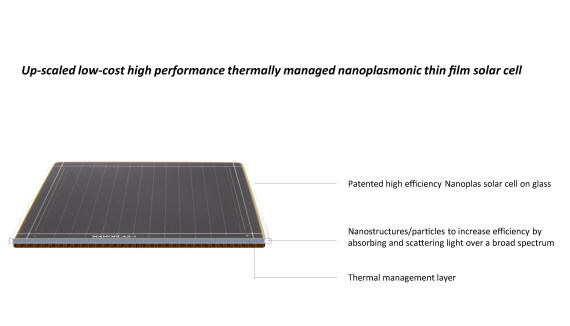 The goal of this ambitious project is to develop a large scale thermally stable solar cell technology with double the efficiency of current glass based thin film solar cells at half the cost. This will be achieved through the integration of the novel NanoPlas thin film technology and thermal management system for recycling and removing heat generated in the cells for optimal electricity conversion efficiency – using innovative low-cost processes.

Midway through the project, a fully operational dedicated pilot production line will be deployed at Swinburne’s new state of the art Advanced Manufacturing and Design Centre in Melbourne. Together with the advanced solar cell testing facilities of CSIRO, the way is being paved for closer collaboration with industry – providing meaningful solutions towards transforming Australia’s existing energy and manufacturing industries through the provision of key technologies in energy generation and manufacturing.